Just some minor additions today and a realisation that the new idler holders I enlarged to accomodate the new larger toothed idler bearings might be out of allignment with everything because of it. I have most of this now drawn up in 3ds Max so I'll have to go into the file and check the alignment sometime in the next few days.

I finally got around to reworking the Z axis bed holders and am a lot happier with them than the original ones. I adapted one of the remixes already uploaded to Thingiverse.

I also printed a self centering nut for the Z stepper and Threaded rod. I might go back to what I was using as a place holder as this thing doesnt seem self centering at all it wobbles! lol 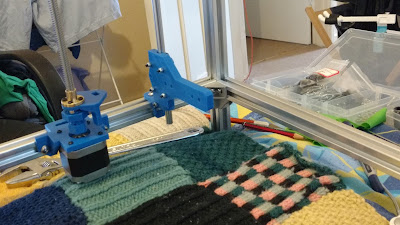 Not that it really matters but these photos show the older version of the Z axis brass nut. I've since flipped it so it now points down 180 degrees and inserted into the plastic. Asthetics more than anything, it doesnt clash or crash into anything. 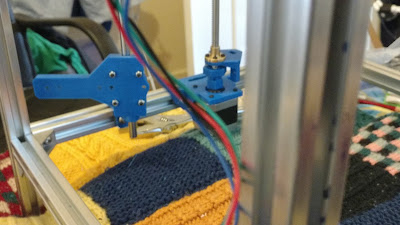 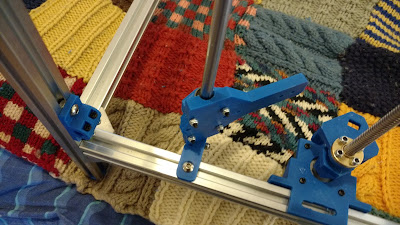 Printed the bowden driver housing thingy but it had to be in a different colour as I wasnt sure I had enough of the other blue left to finish it. 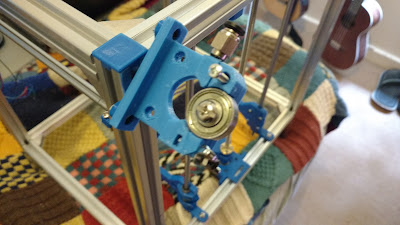 The last few days I've made a comedy of silly trivial errors and today thinking I didn't have any M5 x 10mm screws I drove all the way to the industrial centre to get some, completely forgetting I had a bag of them here already Face palm! The ones I had here were the kind that use a Allen key type of driver and I guess I'm happy that the new ones are Philips instead. It's also the type that a slotted screwdriver will fit, so messing about looking for the elusive Allen keys won't be an issue. ;-D

As stuff ordered from China takes ages to reach me and I'd been informed that some of the stuff wasn't available, so I was forced to order them from Aliexpress instead, then a few days later Banggood says they're on their way despite asking me what I wanted to do "Get a refund etc"
and I told them yes give me a refund. Several days later they had charged me and were shipping regardless ???? so I have a few spares on their way.

This has all caused a little confusion and I ordered some more ptfe tube not realising it was one of the items "on a slow boat from China" so even more spares....... lol. These things were like $2.00 to $5.00 so not a huge life changing problem but I'm starting to question the possiblity that I'm slowly spiralling into early onset alzheimer's lol