Based on the Raspberry Pi 1 case design in the link below, I redesigned a Raspberry Pi 3 case as it seems the Series 1 case's link to MyMiniFactory no longer works. It also is out of date and doesn't fit the new Pi's.


The mesh needed to be manifold so the long process of weaving the crust as one solid water tight mesh began.
I avoided trying to boolean the sections together for just about every reason you could reasonably think of. 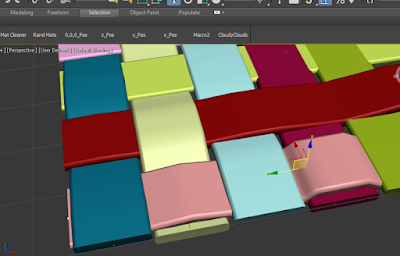 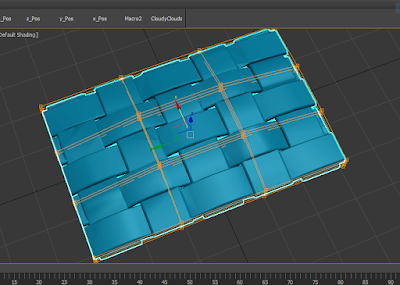 The weave and the outer edge were bought together and Booleaned into one mesh
and while it isn't shown here, because at the time I was too deep into my process, it was then sculpted into the shape I wanted.

I just used simple box modelling techniques for most of this and added turbo or mesh smooth modifiers to get the rounded soft pastry look :-)

Called box modelling because it all starts with a box........no less. 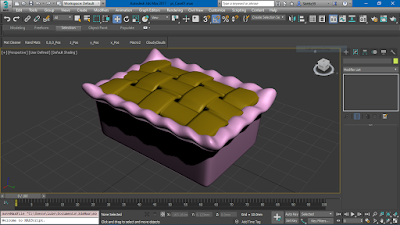 A bottom was made for the top in Fusion 360 and imported back into Max to be mated with the top. 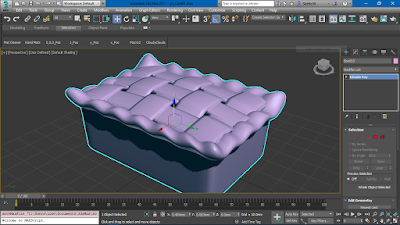 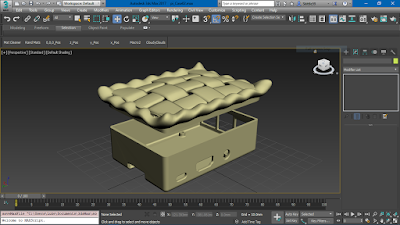 My logo was added on the bottom to satisfy my ego :-) and to help prevent someone passing it off as their own work. Something that the long long hours put into all of this, wont let me tolerate :-) 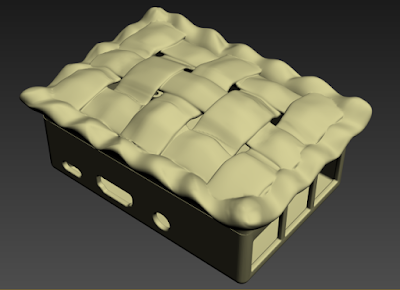 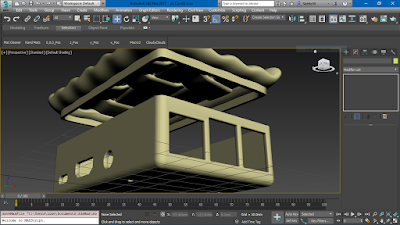 I used 3ds Max for most of the modeling and design. 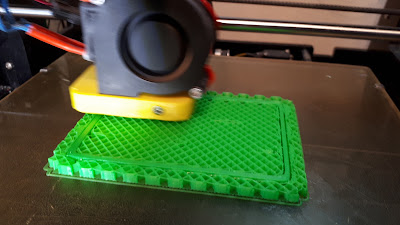 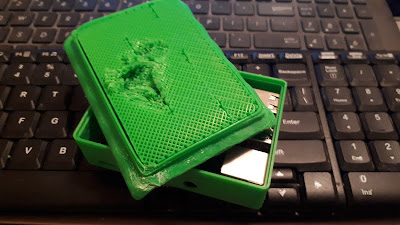 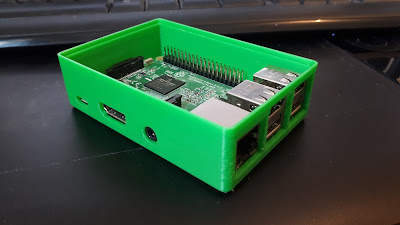 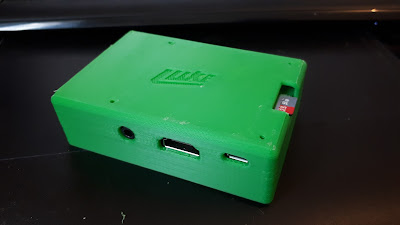 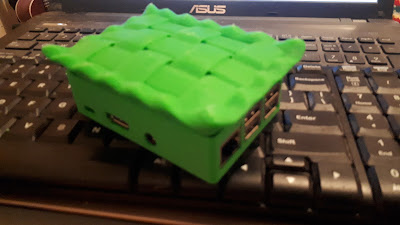 Because I was painting these (There were 6 of them to allow for mistakes) I printed them in 3d Filles pla+ Green  https://3dfillies.com/plaplus-filament-175mm-1kg/ as any colour would do.

You could easily have used white or another light colour that would match the top coat but I have years of experience painting things and knew I could cover the green. 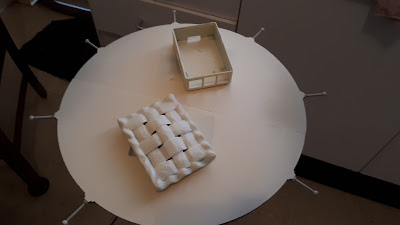 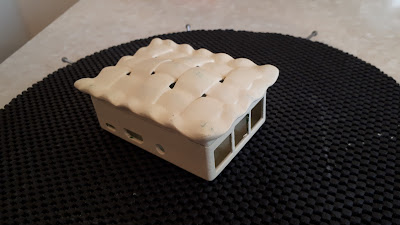 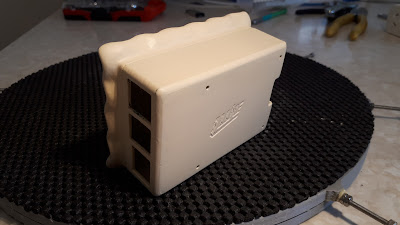 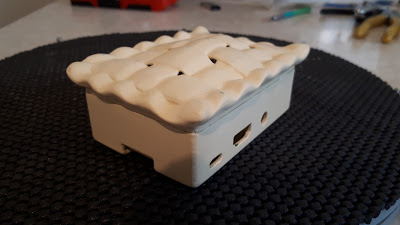 A combination of Beige and grey Primer Filler were used to undercoat and fill the layer lines. I found the beige was a little better for this. I started with the grey then switched to the beige.

2 full cans ended up being needed to get the layers covered, with plenty of sanding in between. 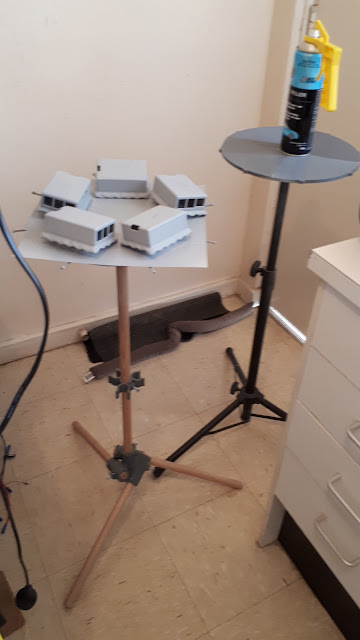 The final colour was a beige automotive acrylic lacquer that was close enough to what I was after for my base colour. 3 cans of paint so far. Two undercoats and one top coat. 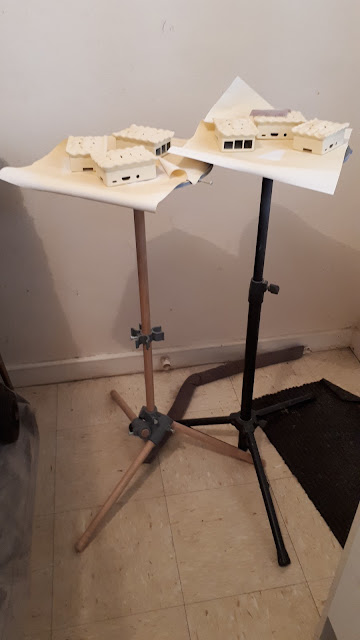 I rendered the top of the design in 3ds Max and scaled it to the correct size. 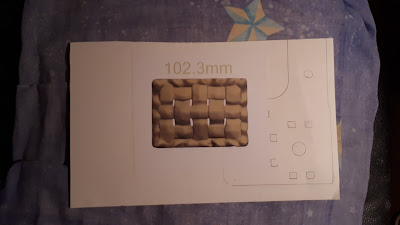 I then glued the paper with some spray adhesive to some card stock.


Then I drew around the inside of the raised sections that would get the darker colours
and cut them out with a stencil knife with a No 11 blade in it. 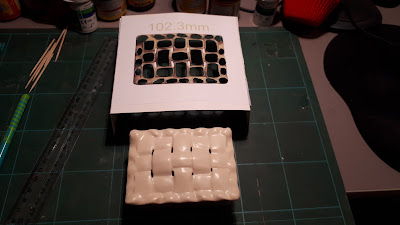 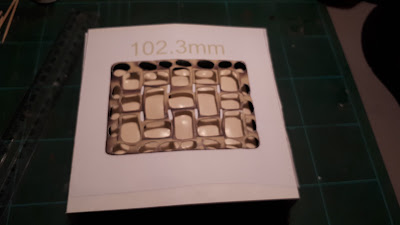 I then scored the card and folded the wings down to form a tent above the case so as not to touch the cases themselves. 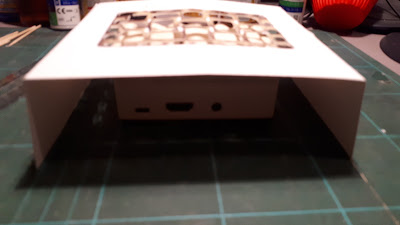 I then airbrushed a combination airbrush water based acrylic paint and some ordinary acrylic artist paints I already had here. This allowed me to mix up any colour that I needed to. 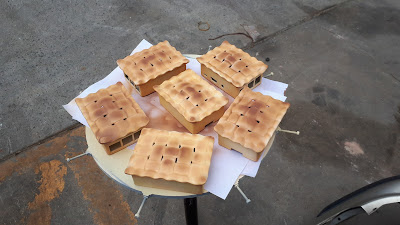 There were about 5 or 6 colours used in the end to get the look I was after. The first 3 colours were all freehand painted without the mask and quite randomly applied.

The next 2 colours I used the mask to prevent paint from reaching the places I didn't want any of the darker colour to hit. 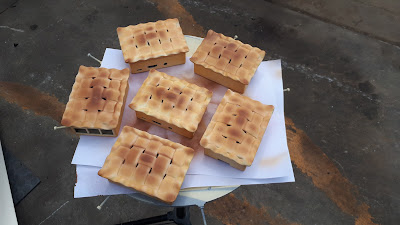 So working from lightest to darkest with creams and yellows and umbers and browns I built up the pastry to look nicely cooked and even a little over cooked.

The last and darkest colour was hand painted freehand with my airbrush. 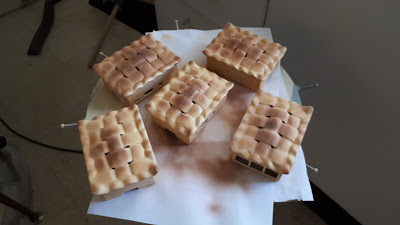 When everything had dried, it was going to need a clear coat. This was always something that was going to happen as the water based paint over the lacquer was never going to adhere all that well and was going to wipe off during handling. Not easily, but over time if left un-coated.

So I used some picture varnish designed to go over both types of paint to protect artwork. Luckily I had this from other art projects.

There are some paints designed to do this and used a lot in the airbrush industry, but were way too expensive and I only needed a small amount so settled on this instead. 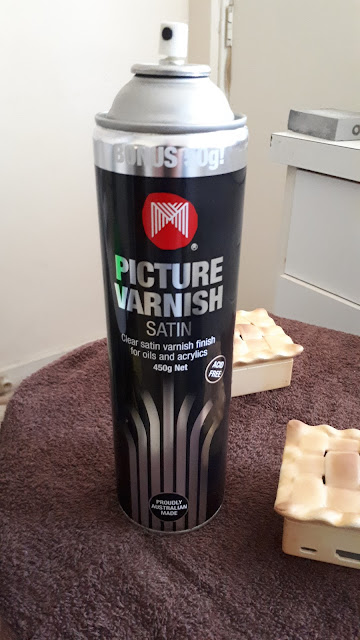 Here they are with a raspberry Pi fitted inside one of them. I had originally increased the scale of these by another 1% to make sure the RPi3 would fit comfortably.

The test fit prior to painting was fantastic so I plowed on ahead "Mr Plow!"

After they were painted they were much more difficult to fit in the cases. I suspect the 3d prints were still off-gassing and shrinking while they were waiting for paint and also were contracted even more by all the coats of heavy paints that followed.

The RPi3 still fit, but need to be patiently fitted into the case. 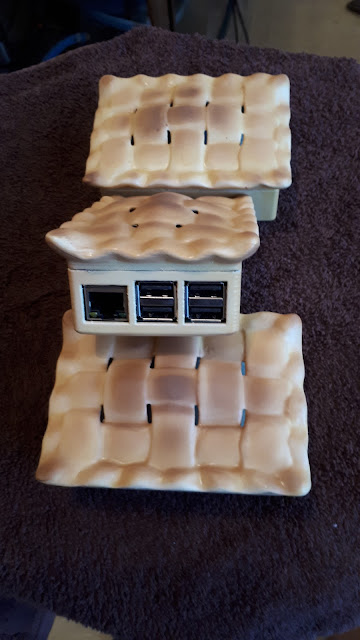 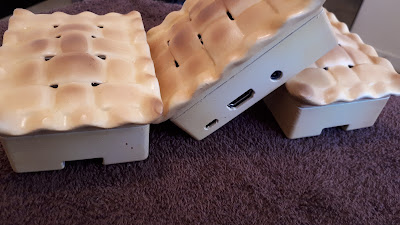 I have kept one of these for myself, one went to a friend who let me borrow his compressor after mine decided not to work

All the others are destined as Christmas presents for close friends that have supported me.over the years.