What paints stick to petg and the Cross Hatch Tape Test

Well first things first. The materials I will be using will be listed and the results that I get, will reflect them, not the materials you might be able to get, so do the same types of tests as this on your own substrates first, with the paints you can get.

I'm also not going to try other types of paint as I'm looking for a one product suits all approach so I don't have to stock multiple versions for different plastics and I know this type of paint works on pla already..........http://lukethier.blogspot.com.au/2016/06/photos-from-my-cyberman-helmet-3d-print.html 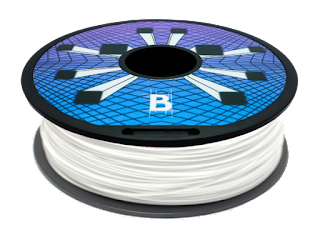 This can claims to be specifically for plastics like bumper bars etc and the cynic in me, thinks that its probably just good old grey auto primer...........maybe with some additive to help with plastic bonding. Its good stuff though none the less and just to be safe worth getting something like this. I would be willing to bet that normal ordinary grey primer would work just as well though.

The reason I think this, is because I believe it is the solvents that help adhere to the substrates using chemical bonds and not just mechanical bonds. I could be wrong, it has happened before and I'd happy to concede given scientific rigour slightly better than my own mythbusters like methodology
;-D 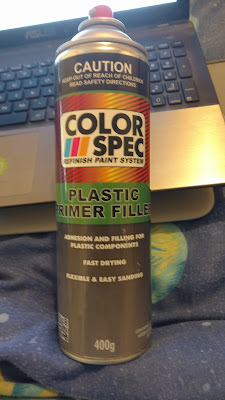 Spray Putty Primer
This is a grey primer that is probably just has more pigment filler in it for it to be called Spray Putty. Again good stuff but with no claims of plastics adhesion. 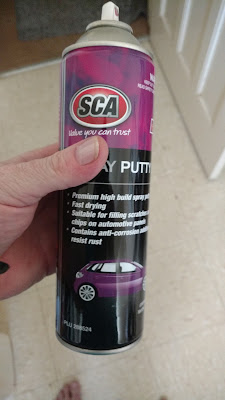 Cross Hatch Tape Test
This is a link to a search engine result for this test. I first heard about it sometime in the early 80's from someone from the Australian National University and have used it thoughout my career to test different coatings on different substrates.

Basically you just score the coated surface after allowing the coating to cure/dry for the recommended time, you use some sticky tape rubbed onto the cuts and ripped off to see how well the coating sticks.

So result No1 using the first can of spray meant for palstics.

edit: Absolutly no surface preperation was used prior to painting. No sanding, no wiping with solvents and no wiping to remove dust with a tack cloth...................What can I say, I'm both lazy and curious :-)


So good! It has stuck like a champion and trying to scratch it off after the tape failed to damage it. was a big tick for its adhesion to petg.

If you look closely at the photo you can see a smear in the middle of the cross hatches on the right hand side of the test piece where I tried my thumb nail to try and remove the paint.

I have another piece sprayed up with the other can of spray putty and will post its results in 48 hrs.

The second piece which was once a part of the first piece that I'd cut in half was sprayed and left to dry for 48 hours. 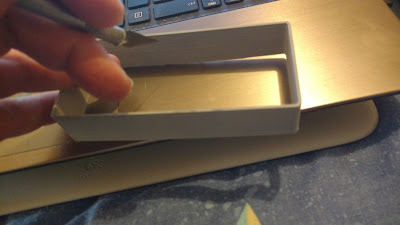 I cut a cross hatches into the piece and tried the adhesive tape to see if anything would be removed and nothing was. I then tried my thumb nail and finally managed to remove some paint and plastic with the exacto knife. The fact that to remove paint I had to remove plastic as well bodes well for this type of paint.

I'd like to try some ordinary grey acrylic laquer primer in the future but my cynicism and belief that these are just essentually the same products with different labels for marketing still holds sway in my mind...... my wallet is also a contributing factor but should I find myself in the position to try it I'll post the results here :-D
Naturally I'd be happy to be proven wrong, but I've been in advertising for so long now, everything looks like a marketing maneuver to me lol

So my belief is that any automotive grey primer will adhere to petg really well and I'd be willing to bet that the Arcylic Lacquer topcoat would stick as well even without the undercoat. I'm not recommending you go without a good primer that will help fill gaps etc I'm just saying you probably could, in a pinch.

Edit:
I need to stress that I only tested one brand of petg and will test others if and when they become available.

I will test different base colours of petg as well just to be thorough.