I redesigned the end of the bed support at the front as the original one had only one bolt hole.
I also had to shorten the Z axis bearing / bed frame holder by 25.4 mm as the bed plate holder at the rear had no where to bolt on to.
STL for the front of the bed.
STL for the rear Z Axis 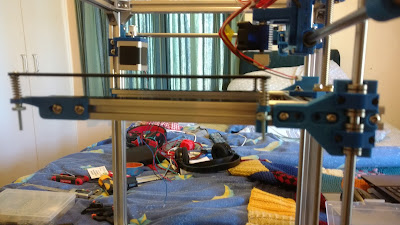 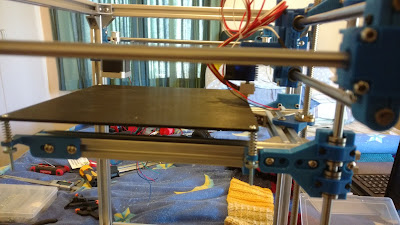 The photo wouldnt focus but I'm trying to show the new M3 pan head bolts stting lower than the stupid ones I ordered, some allan keyed ones that sit way too high above the build plate.
I wanted some counter sunk ones but when conglomerates that run shopping centres buy up hardware stores you end up with huge stores that no longer sell hardware like they used to, and you no longer get much of a choice.

And then they all whine that we are spending all our money overseas, via the internet! 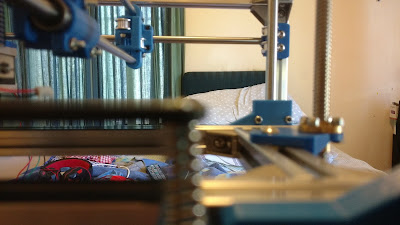 The lengths of 2020 that were cut for this build were:-

Were I to rebuild or buy some more 2020 in the future, I'd add 10 or 20 mm to the Y Axis, so it was 330/340 mm for some additional clearance from the Z axis holders at the rear as well as some peace of mind. In hindsight I would consider adding another 10/20mm to the X as well.

Suggestions in the comments if you know.
I need to find out about how to set it up so it knows home will be a set distance away from the bed, so to be clear, when the extruder is at its home position it will be about 25mm away from the bed in X. Where do I enter this information in firmware so it knows this?

The X Axis gives me room at "home position" so the hot end sits off the bed at rest and allows room to clear the nozzle.

I havent yet fitted the end stops so I'm still not certain of anything until that is done.

edit: The end stops showed up today and for reasons not yet clear 9 of them showed up lol Bangood said they were out of stock on some items so I cancelled that order and ordered some more, then they turned around and said they were ready to send the same items a few days later, so who knows what going on with them. 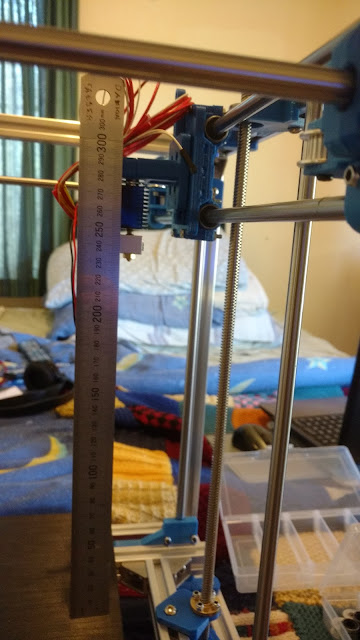 I could have assembled the printer in the lounge room on my little coffee table or on my kitchen table but both are covered in stuff that I didnt want to move just yet ;-D 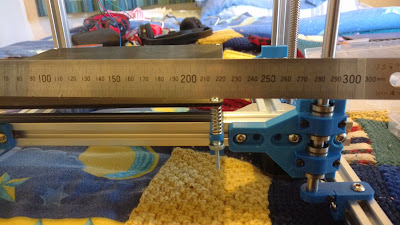