Trying to reprint the Skeleton Ukulele is becoming a real nightmare.

An email to Aurarum to determine colour consistency

Dear LukeUnfortunately it is most unlikely that the stock we have today is the same batch that you received on your last order. We manufacture large volumes of a wide variety of filaments and as such, our stock is constantly rotating. That said, we follow strict formulas for the mixture of our plastics and as such, you can be quite confident that the glow blue PLA you purchase today will be practically identical to the stock you purchased last.Also, it would be helpful if you actually told me the batch you have, so that we can check if we still have some of the same batch in stock (it is the numerical number next to the "Aurarum Pty Ltd" part of the label.Regards,Trevor Dawes.Customer service

I reordered the filament and was worried about the colour match as I'd run into this issue before. The only good thing is, Aurarum has batch numbers on their rolls unlike others like Blueprinted who don't. I'm not convinced they don't both share the same factory as the last roll of Glow in the glow in the dark blue looks remarkably similar to the stuff from Blueprinted, a duller grey white colour as opposed to the brighter white I've received before.

The worry is, that my last roll was batch number 19, and the batch I received was 37. So in the relatively short time I got the last roll, 18 batches were run off the production line, this must mean a batch is probably only 1 or 2 rolls?

Thanks Trevor the batch number is 19.The roll I have left now is around 2/3 rds of a roll and to finish the print I have in mind, it will take 1 more roll, but if it's a different colour then I'll need 2 rolls which doubles the cost.A stronger version of my skeleton ukulele is needed so I've redesigned it and now need to reprint the body.

I wonder if you could send me a 2 metre sample to test print before I commit if its a different batch number?
Otherwise I'd rather wait until I can afford to get 2 rolls at the same time from the same batch before getting this one.
Just hang onto this order and in about a week or so I'll be able to afford the second roll.

A hurried call from Trevor a few days later asking if they should send the filament completely ignoring my request for a sample and holding my order so I could be assured of two rolls that are the same colour. I'd ordered some other materials from them and I think they were pushing to ship them all together.

Money is a real issue for someone on a pension and at $40.00 a roll getting 2 rolls at the same time is something you save for.

This is what arrived after him telling me that the colours don't vary and their formula is the same every time. 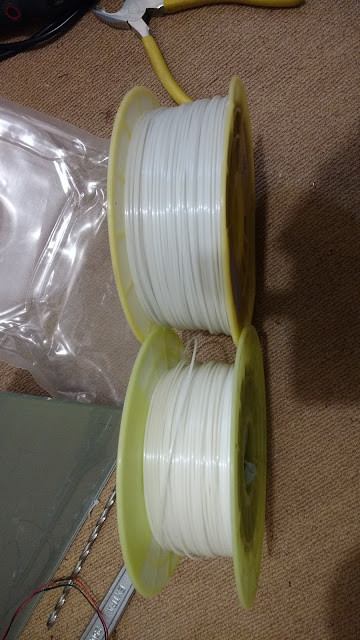 Even in this phone camera photo you can tell it's not the same colour and I was hoping to print the new uke with the one roll and what I had left over form before I didn't want to buy two rolls at all. Wary of the colour issues between production runs I knew I'd probably have to get 2 new rolls.


My reply to which no reply has been received,

Your formula might be accurate but your base materials have obviously changed,
you can clearly see the colour difference even in this lousy phone photo.
The Batch number for this latest one is 37

Imagine a third of my print looking clearly different?

This was on my last email

"I wonder if you could send me a 2 metre sample to test print before I commit if its a different batch number?
Otherwise I'd rather wait until I can afford to get 2 rolls at the same time from the same batch before getting this one.
Just hang onto this order and in about a week or so I'll be able to afford the second roll."

....but instead I get a call asking me to decide what to do, a few days later, no reference to a sample just pressure to make a decision I didn't want to make until I knew if the roll was going to be from the same batch.


Now what am I going to do?
Will you keep a roll of Glow in the dark blue pla batch number 37 aside for 19 days until I can afford to get it?

I was and still am keen to find a Aussie supplier and loyally stick to them, but these are the kinds of reasons I cannot reward otherwise pretty good service and have to shop around. I need understanding of what I'm trying to achieve and a tiny bit of help getting the correct materials to do so.

I'm not sure if shipping was the reason for the phone call and I obviously made the wrong decision but it was based on your story that the formula and filament changes little. This is clearly wrong, if need be, I will pay for extra shipping. I'd rather get what I need, than save on shipping, just to ship it along with something else!

The last time this happened from another supplier the guy tried telling me the colour difference was from uv light changing things and other ludicrous crap.

I worked managing a plastics company for years, believe me I know that all the variations in colour changes are mainly due to basic material differences in each batch not UV or any other lame excuse.

I showed you what I'm making.
It takes, at minimum one roll of filament to print just the body. Now I'm having to reprint the body solid, with high infill from its original hollow design.

It will definitely take more filament to print the whole thing. Will it need another roll to complete it? I don't know, but I still have the neck and bridge to print as well, so I needed to know if the colours would be the same.

I want to desperately help Aussie companies but they need to lift their game and understand what it is we are trying to do.
Something I'm pretty sure I tried to convey with my earlier email with photos. I wasn't just trying to brag, I was hoping for some understanding and some assistance.

Will you keep a roll of Glow in the dark blue pla batch number 37 aside for 17 days until I can afford to get it?

Do I return the roll of filament at around $14.00 cost to me and cut my losses and just get the 2 rolls later (from whoever has it in stock at the time) which also pushes back when I can restart the printing of this Skeleton Ukulele.

No reply as yet, so I think I'll box the filament back up and return it then save for 2 rolls but this is costing me more money than its worth.

Loyalty my arse, I'm an idiot for thinking anyone in business is anything other than too busy to worry about customer service. I'll just ignore what these people tell me in the future and buy from whoever has it in stock.

Unfortunately just ordering two rolls won't guarantee me the two rolls will be the same colour either. Sigh!