Hi, its time to update you on the Skeleton Ukulele build.

If you've read some of the previous posts you'll know that while the print was completed, it had its issues. I decided to get some more glow in the dark filament but it showed up the wrong colour. I gave feedback suggesting batch numbers be added to the rolls of filament (and still suggest they do) so people doing multiple roll prints have access to the same material. Were I not so poor I would just order more than I need but I'm not in that situation and unless I win the lottery I never will be. $80.00 is something I have to save for and that would take 2 to 3 months with my income source.

Another roll was sent to me but it too was a different colour, it was suggested it was due to all sorts of silly reasons, uv light etc etc but as someone who used to manage a plastics company, the truth is that it too, was from a different batch. It's not too hard to see how even companies making these rolls of filament have to source their base plastics from different suppliers and how these base materials including the colouring agents can be different from batch to batch or supplier to supplier. Even the mixing recipe could have been different.

This means I still have all the bits and pieces to make the old one but a lot of repairs to make. I wanted to make to some of the pieces again and that meant I needed more filament and this is where I ran into the colour matching issues.

So with the new roll I'm reprinting the thing.

The new material even prints differently from the first batch and issues are arising again. Joining the pieces will never be that perfect, you'll always see the joins but the new prints are not quite as good as the first print. 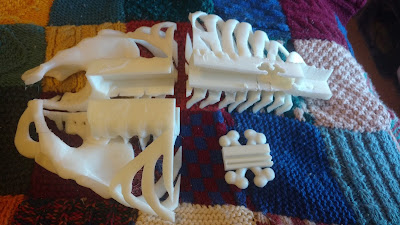 One of the things you need to do, is not work when you are tired and not concentrating. I had to put some super glue on the base of some of the ribs to fix and strengthen them.

I hadn't removed any of the lower supports which I should have before gluing and spilled some without realising and glued the supports to the effing thing aaaaaaarrrrrrrrrrrrrr!!!!????? 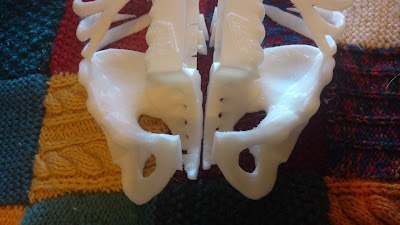 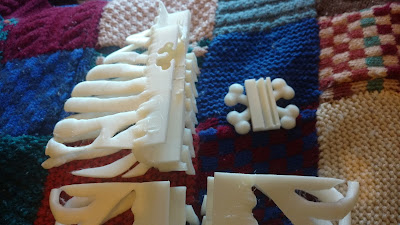 You can click on an  image to embiggen it! 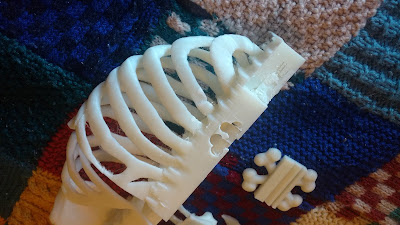 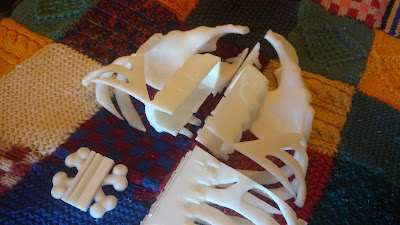 The bridge need printing again as I printed the wrong one.............well technically its fine, but I redesigned it to be like this one. 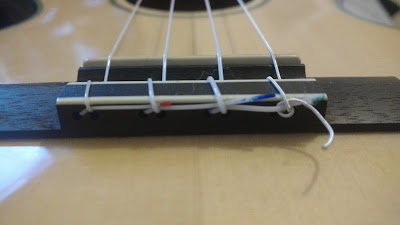 The bridge has two holes and allows the string to be its own holder and its neighbours holder as it were. Which is fine, if you're right handed, but for us lefties (which is why I wanted to make my own instruments in the first place) the pointy string ends up stabbing you in the forearm...................so I redesigned it to be mirrored so they sting ends point down. I made one with just the single holes for inclusion in the files when I make them open source and accidentally printed that one instead so have to go back and reprint the correct one. I'm in the middle of the 16 hour print for section 4 atm then I'll redo the bridge, and tuner buttons. 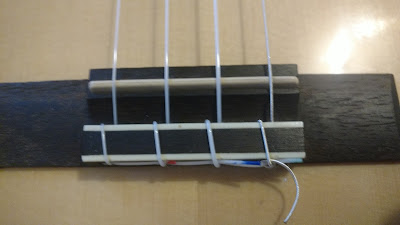