Any updates will be posted here so come back to see its progress.


A challenge to reverse engineer this robot had a couple of us trying to see if we could do it. We have no other designs on this other than scientific curiosity and to see if it is possible.

I'd like to say as of right now yes, yes it is possible I have a crude partially working prototype. 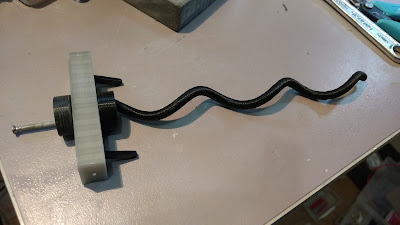 Due to the size limitations of my printer 220 x 220 x 230mm and not wishing to join and lengths of anything I have to keep the longest piece to under 220mm. That means the helix can't be any longer unless I join it. Keeping everything else to some kind of scale similar to the original article forces me to keep some of the other pieces quite small and delicate.

A redesign while not keeping to the scale of the one in the article could mean a sturdier and easier to work with model so I might look into that in the future. 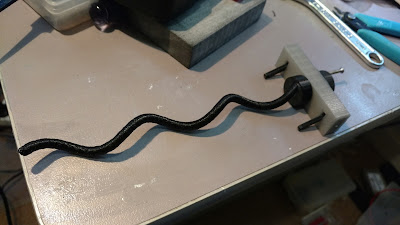 At this stage it is being held together quite precariously with bits of filament which are not held in position by anything and fall out if you even breathe too hard :-) 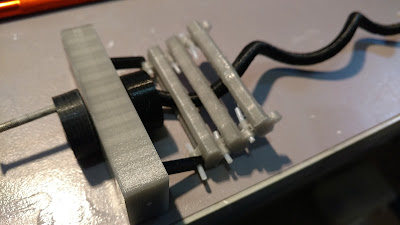 How best to fix the filament to the pieces, I'm still considering. Melting the ends with a metal object that's been heated may be my option but I'm still printing more of the errrr legs so I have time to think about it. 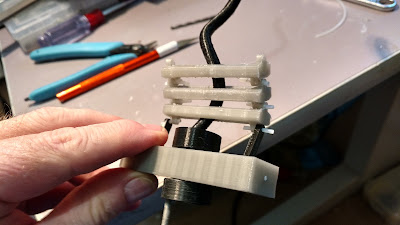 Printed in Blueprinted black and glow in the dark eSun blue

Ok for the connectors I just melted a piece of filament to put a mushroom on one end then threaded it through the two pieces and then applied the soldering iron to the other end and this seems to work.

The small legs were failing and breaking so I've redesigned it to be a bit bigger.

Here are the last pictures I took of it before it broke after showing the successful working prototype :-) 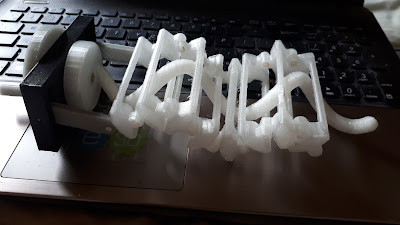 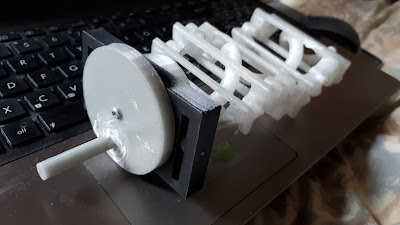 Rather than an electric motor I just designed a hand crank which broke after some vigorous winding by enthusiastic testers. You know who you are!