I've been fitting and testing the new extruder for the last couple of days. A number of changes need to be made but nothing too difficult or drastic.

The new second fan was running into the frame of the i3 so I preformed some surgery on the fan mount with the Aldi dremel. A temporary X Axis end stop errrr thing, "what the end stop crashes into?!" was mounted to the new carriage.

The Cute little pancake Nema 17 stepper motor is getting very hot, possibly because my new e steps settings are kinda high, so I might go back to the old motor.

I had to reverse the motor as it was running backward and I didn't spot it till much later. I was tired ok!

Because the new hot end and carriage is basically in a new home position, the relationship between the bed and it is now off, so using the leveling configuration makes the second position completely off the bed lol. How I fix that is anyone's guess and will take some research. I just hope I don't have to flash the firmware!

I'll be re-modelling the new carriage to include the skinnier rear fan mount and a piece to hit the end stop. The front fan is in the way of a few things but nothing that is a real problem but I may as well see if bits cant be moved into better locations etc. An alternative is to model one of those circular fan shrouds and only have the one rear fan so the front isn't so obscured.

The test print with the correct e steps looks fantastic!!! so far so good.

Off to a gig tonight so it will all have to wait until tomorrow or the next. 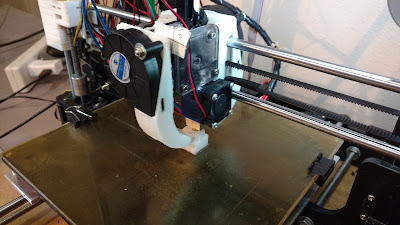